The recent Blessing of Animals service held at All Saints Church was a great success. Julie Bozicek reports that, if she counted correctly, there were 23 dogs (including 2 guide dogs), 3 alpacas, 2 guinea  pigs and 1 cat in attendance.    The congregation were treated to a talk about what it means to live with a guide dog, the invaluable help these special dogs give and how they enable their companions to lead more full and confident lives.

The service itself  included prayers for all types of animals and endangered species and at the end each pet and owner received a blessing.  All the animals behaved impeccably.

Two of the more unusual animals attending the service were Pudding and Sugar, seen here in the churchyard after the service. 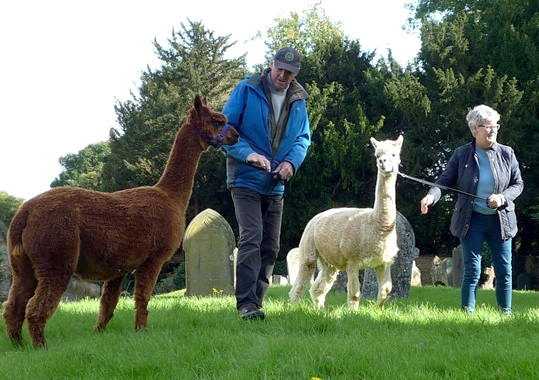 A new bus timetable has been issued for the service between Thorpe Malsor and Kettering.  The service will now be operated by Centrebus and available of Tuesday, Thursday and Friday only.  All journeys are operated by low floor buses.  The service now runs slightly later than the interim service introduced in July.  Click here to view the new timetable.

The funeral service for Mavis Mobbs will be held at All Saints Church on Monday, 4th September at 2pm followed by a private committal at Kettering Crematorium.

Thank you to everyone who picked up their needles and ensured the recent yarn bombing of Thorpe Malsor was a success. The event was a huge team effort and all contributions were much appreciated, especially from the young people of the village who turned out in force to decorate the lamp posts, signposts, trees and walls.

You many be able to save hundreds of pounds every year in electricity, maintenance and repair costs by contacting the company.

To help customers identify and report pumping stations, further information can be found by following this link to the Anglian Water website.

The Parish Council have been informed that, due to unforeseen circumstances, Brookside Travel have had to hand in the contract for bus service 35 at very short notice.

It will now be operated by Stagecoach, under an emergency tender, from Monday 24th July until Friday 1st September. The service will operate 45 minutes later in each direction than Brookside Travel did.

Click here to view or print the interim timetable.

Major works are being undertaken to the railway bridge on Northampton Road, Kettering from 24th July to 4th September 2017; the road will be closed at the bridge throughout this period.

Although the recommended diversion for A14 traffic accessing Kettering is via the A14/A43/Rockingham Road, it is highly likely that many road users will exit at the Rothwell Road junction on the A14, and local traffic from a number of housing estates will divert along Gipsy Lane. As a result, villagers travelling to Kettering are likely to experience considerable delays at the junction of Gipsy Lane with Rothwell Road, by the Crematorium.

We've sadly lost our oldest village resident Jim
There can't be many villagers who did not know him.
A character and friend to the end
So our thoughts we would like to lend.

Jim was generous to a fault, but content with his lot
Church Gates of Hope repaired, and looked after his family plot.
When village 'do's' were on Jim would be there
Stick in hand, cap on head, sitting in a comfy chair.

His fire at home was always lit
Telling stories of his grate that didn't fit.
A fir tree by his fence was eventually cut down
There the trunk was left in biggish rounds.

Then Jim with chainsaw sat for many hours
Cutting and stacking it into towers.
Never without fire lighting sticks thanks to Eddie
Bob brought coal when he was ready.

From the shed 'Do you want bolts or screws?'
'Any nuts Jim?' 'Ah! Got none of those'.
Another time he would say to have a clear out
Which was a fine idea, then he'd have a turnabout.

Once he had his scooter going there was no stopping
At break neck speed to the club he'd be popping!
Playing dominoes on Thursdays with his friends
Then most Fridays with Ken, these were his trends.

Any raffle he would have a go, winning many prizes
Of chocolate or bottles and other surprises.
'What do you know' would be what he would say
'How are you Jim?' 'Half and half' he'd reply this way.

'Got no complaints, club's doing all right'
'It's right what Bob says.' 'Am I right, am I right?'
'What's Thorpe news?' would follow after
That would create a bit of laughter.

Whisky was his favourite tipple, which must have kept him going
Yet he liked strong coffee with loads of sugar, there just is no knowing.
There is so much more that I could say
But let's remember Jim in our own special way.

To have reached 96 was fantastic you will agree
So rest in peace Jim, from all of us and me.